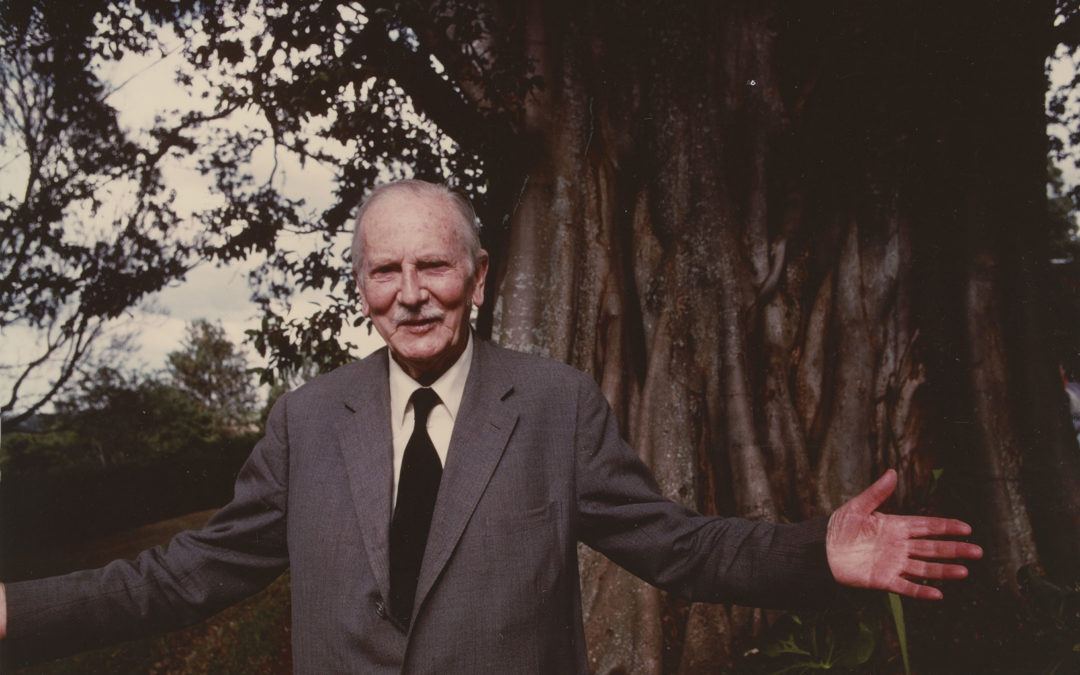 Every now and then history throws up an extraordinarily focused individual. One of those was a gentleman from Hampshire with a simple obsession with trees.

Once upon a time there was a man named Richard St Barbe Baker. He was not an ordinary man, this St Barbe, and his journey was not an ordinary journey. His goal was in the realm of fantasy: to protect the planet’s existing trees, to reforest the Sahara and to save earth from environmental destruction.

He took this goal very seriously.

He is no longer with us, and his story has become lost to all but a few who cherish his name. So I will tell a part of it here, particularly about his Incredible Journey. For he was a man way ahead of his time and should not be forgotten.

St Barbe was born in a country house in Hampshire, England, in 1889 and at some point, while wandering in the Hampshire forests, it came to him that he loved trees.

In the years that followed trees had to make a bit of space in his heart for horses but were never displaced. As a teenager he went to study science at the University of Saskatchewan in Canada and spent a good deal of time thundering around on horseback with Amerindians.

Back in England he followed a loftier path for a while, studying divinity at Cambridge, but when the First World War broke out he signed up and went to France, winning a Military Cross instead. Back at Cambridge, having been injured and discharged, he studied forestry and – after graduating in 1920 – was posted to Kenya as a forester with the Colonial Service.

For a young country gentleman of the time his trajectory thus far was fairly normal. What followed was not.

He arrived in northern Kenya to find forests being decimated and the desert closing in.
“I was driven to the conclusion,” he wrote, “that it was essential to obtain the co-operation of the people to stem the tide of destruction.”

He discovered that the Kikuyu, when they cut down a portion of forest, left giant fig trees to collect the spirits of their felled companions. He also discovered that anything meaningful began with a dance. So he dispatched runners all over the country, inviting warriors to a dance of the tree spirits. Thousands came, all decked in war paint, and filed past his forest station, clan by clan.

What followed became the stuff of legend. He told them they needed to replace the trees they cut. They told him they thought planting trees was God’s business. He told them the spirit of the trees lived in the seeds and these could not make new forests without their help. There was, it seems, a collective “aaha!” and, right there and then, Watu Wa Miti (Men of the Trees) was born. It was an organisation that required people (not only men) to protect and plant trees.

It caught on like wildfire. Within a year his Watu Wa Miti had nurtured and raised 80 000 trees. Then, under St Barbe’s guidance, the idea began to spread like the arms of an oak. At last count (and I am the victim of my sources here) the organisation had branches in eight countries and these had planted more than a billion trees. That is an achievement worthy of admiration, without doubt. This story, though, is not about tree planting but about the Incredible Journey undertaken in the name of trees.

St Barbe had seen the effects of desertification. In 1953 he decided the best way to fight the desert was to understand it. And to do that he needed to travel through the greatest one on earth, the Sahara.

It must be remembered that in the 1950s the Sahara was pretty much still terra incognita to all but wild Taureg camel herders – a place where people ventured into and were never seen again. Travelling there was like going to Mars.

St Barbe plus two other Brits, in a vehicle that looked like a cross between a Model T Ford and a shoebox, planned to travel from Algiers (without French permission) across the Sahara to northern Nigeria, east though the Sahel, then southeast through the Congo, across the Ruwenzori Mountains to Uganda, then through Kenya to Mount Kilimanjaro. No radio, no backup plans.

They left London with bags of peach pips donated by eager crowds in order to turn the desert into a Garden of Eden.
St Barbe listed their supplies as “cans of pineapple juice, soup powders, hard biscuits, fig preserve, lots of fresh citrus fruits, dry tablets of Horlicks malted milk and seven jerry cans of petrol given to us by the Shell Company.” Water was carried in goatskins. He wore a “Bombay bowler” which he soon lost and reverted to Arab headgear. He also lost his sunglasses.

St Barbe was nothing if not thorough. At the edge of the Sahara he felled a eucalyptus tree and counted every leaf. From this he calculated the transpiration per leaf, then per tree, multiplied this by the number of possible trees per hectare and concluded that each day a hectare of these trees pumped 36 cubic metres of water into the atmosphere. No trees = no clouds = no rain = Sahara. Simple.

Before them lay a vast, barren landscape with not a tree in sight. They plunged into it. At the oasis of Djelfa they found goats nibbling the bushes. At Laghouat they found goats browsing up in trees. At In-Salah they found goats chewing at stumps. “They eat everything, trees, bushes, olives and tufts of grass,” St Barbe complained. He developed an abiding hatred for goats.

He chewed Horlicks tablets to stay awake at the wheel when they travelled at night, which they mostly did.

Old Arab camelmen told them stories of forests that had existed in the central Sahara in their lifetime; all cut for fodder and firewood.

They followed dry watercourses and St Barbe dreamed of drawing up underground water to raise millions of trees to push back the desert. At one point they traversed a thousand kilometres of desert without seeing an oasis or a person. They nearly lost their vehicle in quicksand. In the middle of all that they found a solitary thorn tree and nearly overturned in their excitement.

Heaven knows how, they got across the Sahara, rolled along the Sahel and plunged into the Congolese rainforests, marvelling at their verdancy and aghast at the effects of slash-and-burn agriculture.

They climbed through the foothills of the Ruwenzoris, barrelled through Uganda and into Kenya. In these two countries they were shocked to see Sahara-like conditions advancing at speed. Finally they pulled up on the slopes of Mount Kilimanjaro.

Back in England St Barbe sat down and puzzled through what he’d achieved. “I wondered what to do,” he wrote in what was to become a book, Sahara Challenge. “How to begin to tackle such a stupendous task, as to fight seven million square miles of desert? How could I, one man, reclaim the Sahara? It’s not even a project for one nation.”

He began reasoning. The goats had to go. Then the oases had to be assisted to expand their tree cover and eventually link up, creating microclimates to stimulate rain. Then what about all those dry riverbeds? The water must have gone somewhere. Was it in vast, underground aquifers waiting to be tapped?

St Barbe’s Incredible Journey would be the rudder which set the course for the rest of his life.
“The Sahara affords a challenge not only to Africa alone, but to the world,” he wrote. “It offers a glorious opportunity to sink the political differences and past exploitations of our planet into a new creative economy, a new way of living, a biologically correct way of life bringing health and security.”

He worked tirelessly to get governments and organisations to work together to plant trees and halt the march of deserts. He befriended presidents and royalty, gaining their support for his projects. At his suggestion, Franklin D Roosevelt established a forest ‘shelter belt’ from the Canadian border one thousand miles long and a hundred wide and formed the Civilian Conservation Corps which provided six million people with conservation work.

In England, at the age of 74, he rode 530 kilometres on horseback, giving talks about forests to schoolchildren. He took up flying lessons so he could see forests from the air. He wrote 20 books dealing mainly with trees. All are now out of print and virtually unobtainable.

In June 1982 St Barbe was in Canada to place in the earth the last of the million trees he personally planted during his lifetime. It was a poplar. A few days later he died. His gravestone in Saskatoon reads:

Since his death two important discoveries have been made in the Sahara. As he had predicted, huge fossil aquifers have been found under the sands, one of them thought to be about the size of France.

The other discovery was the result of satellite studies by meteorologist Jules Charney. He found that green-covered areas absorb more solar radiation and therefore give off more heat. Warm air carries more moisture, which increases the likelihood of rain. Overgrazed or deforested areas are lighter in colour, absorb less radiation and therefore create cooler, less-moist conditions: potentially deserts.

The conclusion is that deserts do not cause droughts, people do.

We now have much of the information needed to halt the spread of the Sahara. What we require, urgently, is the political will and a Richard St Barbe Baker – a man of the trees ahead of his time.
If a new and better world emerges after Covid-19 in step with Greta Thunberg, his ideas would be a valuable blueprint.