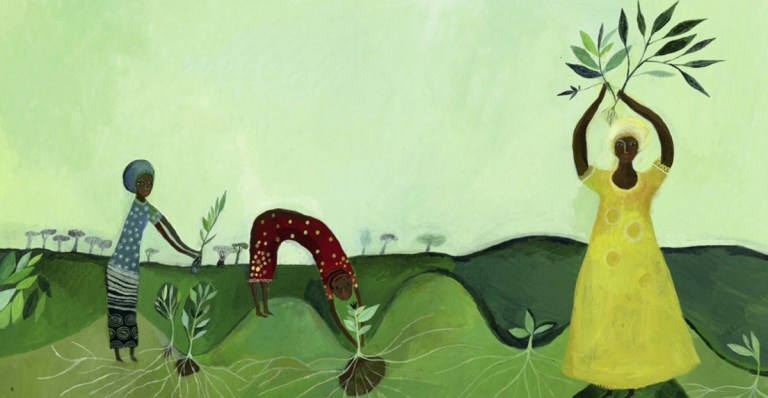 We want to share stories of visionaries who have changed the world – and who inspire us.

Wangari Maathai is one such trail-blazer who turned to trees as an instrument of emancipation, advancing human rights, environmental justice, and civil disobedience – the first African woman to win the Nobel Peace Prize.

She founded the Green Belt Movement responsible for planting 30 million trees and empowering women to partake in social change — an act of courage and resistance for which she was beaten and imprisoned multiple times, but which ultimately helped defeat Kenya’s corrupt, authoritarian president and blazed a new path to ecological resilience.

Born twenty years after the country became a British colony, Maathai watched the colonialists grow richer and richer by cutting down trees to plant more tea. She ached to see the trees fall, but didn’t yet know that she had the agency to stand up for them and for her people.

At eleven, she left home to study at a boarding middle school run by Italian nuns. She graduated from high school at a time when very few African women learned to read at all. In September 1960, then-senator John F. Kennedy initiated a program that welcomed promising African students to study in the United States. Of the entire continent, only a few hundred young people earned such an invitation. Wangari Maathai was among them.

She arrived in America to discover with shock that even in a country as wealthy and emblematic of freedom, human rights were not equally apportioned. She witnessed the height of the civil rights movement just as her own country was finally winning its independence from British rule.

And yet upon returning to Kenya, she found that trees were no better off — colonialism had crumbed, but it had left in the rubble a nation so impoverished and dependent that Kenyans were forced to continue cutting down trees just as the British had, selling the lumber and using the felled land to plant tea, coffee, and tobacco for export.

As marine biologist and author Rachel Carson was making ecology a household word across the Atlantic and issuing the radical insistence that the real wealth of a nation “lies in the resources of the earth — soil, water, forests, minerals, and wildlife,” Maathai was realizing that her nation’s welfare depended on healing the broken relationship between a broken economy and a broken ecology.

She came to see that a tree is much more than an economic resource. She came to see, in Prévot’s lovely words, that “a tree is a little bit of the future.”

Progress, however, is slow. “The longer the lever the less perceptible its motion,” Thoreau — the patron saint of trees and civil disobedience — wrote in contemplating the long cycles of social change.

In 1977, three decades into her outrage, Maathai founded the Green Belt Movement and set out to plant trees all over Kenya, traveling to villages and encouraging people to think about the future, whatever the privations of the present may be.

Her insistence on women’s leadership was nothing short of countercultural in a society where women were expected to demur and lower their gaze in the mere presence of a man. And yet she persisted, entrusting tree nurseries to local women and seeding in them a newfound sense of civic agency.

She herself stood up to the president himself, who had initiated a massive real-estate development in the city’s precious urban forest, habitat to endangered species like the blue monkey and the river hog, and had endeavoured to build a skyscraper and a statue of himself in the heart of Nairobi’s largest park.

In response to the lengthy protests she organized, for which she was imprisoned several times, the government forced Maathai out of her office, calling her “a crazy woman” in press statements and describing the Green Belt Movement as “a bunch of divorcees.”

(Meanwhile in America, Rachel Carson was enduring the same sexist assaults from government and industry, who painted her as a hysterical spinster for her composed, courageous, scientifically rigorous exposé of the pesticide industry that would catalyze the environmental movement.)

But Maathai persisted, alerting leaders around the world to the ecological and human rights abuses in her country. In letters and speeches, her voice reached beyond the government-controlled echo chamber of the Kenyan press, igniting an international investigation that eventually made the president relinquish his exploitive development plans.

On her triumph, a man from rural Kenya greeted her during one of her village visits with these words: “You are the only man left standing.”

Over and over, the president tried to fell Maathai and her movement. In a desperate bid for control,  he attempted to set neighbouring tribes against one another. But Maathai and the Green Belt Movement built a simple, brilliant bridge across this artificial divide — they offered saplings from tree nurseries as tokens of peace to be exchanged between tribes.

Maathai — affectionately known as Mama Miti, “the mother of trees” — was elected to the new Parliament and appointed Assistant Minister of the Environment, Natural Resources, and Wildlife.

In 2004, midway through her sixty-fifth year, she was awarded the Nobel Peace Prize.
By the end of her life, the movement she started had planted thirty million trees, reimagining the ecological and economic landscape of possibility for generations of Kenyans to come, and modelling for the rest of the world a new form of civic agency standing up for nature and humanity as an indivisible whole.

Credit for the illustrated book Wangari Maathai: The Woman Who Planted Millions of Trees: Maria Popova