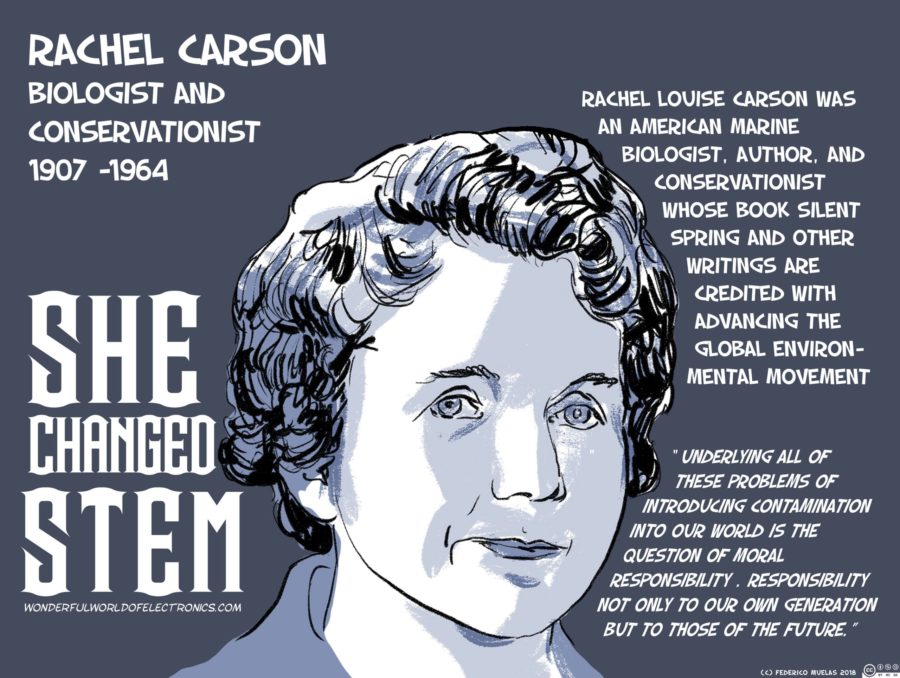 It was a scientist, not a philosopher, who levered a monumental shift in consciousness: Rachel Carson (1907–1964), a Copernicus of biology who ejected the human animal from its hubristic place at the centre of Earth’s ecological cosmos and recast it as one of myriad organisms, all worthy of wonder, all imbued with life and reality.

Her lyrical writing rendered her not a mere translator of the natural world, but an alchemist transmuting the steel of science into the gold of wonder.
The message of her iconic Silent Spring rippled across public policy and the population imagination — it led to the creation of the Environmental Protection Agency, inspired generations of activists,

A scientist without a Ph.D. or a Y chromosome or academic affiliation became the most powerful voice of resistance against ruinous public policy mitigated by the self-interest of government and industry, against the hauteur and short-sightedness threatening to destroy this precious pale blue dot which we, along with countless other animals, call home.

Carson had grown up in a picturesque but impoverished village in Pennsylvania. It was there, amid a tumultuous family environment, that she fell in love with nature. A scholarship allowed her to pursue a Master’s degree in zoology and genetics at Johns Hopkins University, but when her already impecunious family fell on hard times during the Great Depression, she was forced to leave the university in search of a full-time paying job before completing her doctorate.

After working as a lab assistant for a while, she began writing for the Baltimore Sun and was eventually hired as a junior aquatic biologist for what would later become the U.S. Fish and Wildlife Service.
Out of this necessity to reconcile science and writing was born her self-invention as a scientist who refused to give up on writing and a writer who refused to give up on science.
But the more Carson studied and wrote about nature, the more cautious she became of humanity’s rampant quest to dominate it.

Witnessing the devastation of the atomic bomb awakened her to the unintended consequences of science unmoored from morality, of a hysterical enthusiasm for technology that deafened humanity to the inner voice of ethics.

One of the consequences of wartime science and technology was the widespread use of DDT, initially intended for protecting soldiers from malaria-bearing mosquitoes.
After the end of the war, the toxic chemical was lauded as a miracle substance.
People were sprayed down with DDT to ward off disease and airplanes doused agricultural plots in order to decimate pest and maximize crop yield. It was neither uncommon nor disquieting to see a class of schoolchildren eating their lunch while an airplane aiming at a nearby field sprinkled them with DDT.
A sort of blind faith enveloped the use of these pesticides, with an indifferent government and an incurious public raising no questions about their unintended consequences.

In 1958 Carson was alerted to the aerial spraying of DDT devastating a local wildlife sanctuary causing the ghastly deaths of birds, claws clutched to their breasts and bills agape in agony.
This local tragedy was the final straw in Carson’s decade-long collection of what she called her “poison-spray material” — a dossier of evidence for the harmful, often deadly effects of toxic chemicals on wildlife and human life.
And resulted in Silent Spring — her fire-starter of a book that ignited the conservation movement and awakened the modern environmental consciousness.

In an acceptance speech for the John Burroughs Medal, Carson concretized her credo:
“It seems reasonable to believe — and I do believe — that the more clearly we can focus our attention on the wonders and realities of the universe about us the less taste we shall have for the destruction of our race. Wonder and humility are wholesome emotions, and they do not exist side by side with a lust for destruction.’’

“Life and Reality are not things you can have for yourself unless you accord them to all others,” philosopher Alan Watts wrote in the 1950s as he contemplated the interconnected nature of the universe.
What we may now see as an elemental truth of existence was then a notion both foreign and frightening to the Western mind.